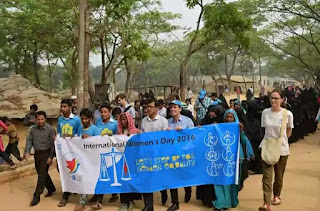 One of my first trips since I assumed my functions as High Commissioner was to Turkey. In Istanbul, I met several Syrian refugee women who told me about the difficulties of living in exile and raising their children on their own, because their husbands had made the hard decision to go to Europe to find work. Talking with them really brought home to me the challenges, big and small, so many refugee women world-wide have to overcome.

Last year, UNHCR carried out a review on gender equality in its operations, which brought to light a number of innovative initiatives to help displaced women. In Ecuador, for example, we have implemented a capacity building project that works with men to prevent sexual and gender-based violence, as well as with national lesbian, gay, bisexual, transgender and intersex (LGBTI) organizations on reciprocated training. In Chad, UNHCR has helped with the establishment of kindergartens in camp schools to improve attendance rates by students and teachers, who are also mothers. The office in Afghanistan has supported the creation of female shuras or women’s committees to create a forum for refugee, internally displaced and returnee women to discuss their needs and priorities.

I am pleased to announce that we will soon launch UNHCR’s Commitments to Women and Girls (2016 – 2025). These Commitments update and supersede the Five Commitments to Refugee Women (2001) and are drawn from the results of the gender equality review, as well as extensive internal and external consultations. Together with the Age, Gender and Diversity Policy (2011), the Commitments will form UNHCR’s overarching policy framework to promote gender equality.
With the purpose of infusing new ideas and approaches into our work, I recently met with the newly established Advisory Group on Gender Equality, Forced Displacement and Protection, which has 21 members from very different backgrounds. I was impressed by their knowledge and experience in working alongside communities to address critical issues such as xenophobia, sexual violence in conflict and the marginalization of women. The first meeting of the Advisory Group was held in Geneva last month and I trust that these inspiring consultations created a momentum that will help us break new ground in promoting gender equality.
The ‪#‎IBelong‬ Campaign to End Statelessness has entered its second year and one of its key goals is to eliminate gender discrimination from all nationality laws. Unfortunately, 27 countries globally still maintain nationality laws that prevent mothers from conferring their nationality to their children on an equal basis as fathers, and many more restrict women’s ability to confer nationality to their spouses. However, there is a silver lining, thanks in part to advocacy efforts by UNHCR and others, as a number of countries have committed to reform their nationality laws. I hope that 2016 will see a marked reduction in the number of countries that discriminate against women in this manner.

In addition to our efforts to achieve gender equality for the women under our mandate, we must also continue our work to promote equal representation of qualified women and men in the workforce. While we have an incredibly diverse workforce with over 10,000 staff in 127 countries who speak over 450 languages, greater efforts are required to reach gender equity within the workforce, especially at the leadership level. I remain committed to ensuring that UNHCR attracts and retains a diverse and inclusive workforce.