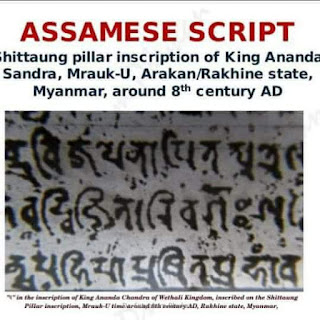 A seminar was held a seminar at the name and style of “Seminar on Sanskrit Literature of Rakihine” at Tawin Gurdan Hotel of Rangoon on 24th January 2018. It was participated with many including two foreign scholars and a Rakhine scholar speaker and led by U Zaw Aye Maung, Minister of Rakine National Affairs Rangoon Division.

The seminar discussed mainly on Annadacandra inscription which was about 1300 years old and very important cultural heritage of Arakanese peoples. The seminar unanimously decides to put it to the UNESCO as a Intangible Cultural Heritage.

The Convention for the Safeguarding of Intangible Cultural Heritage was passed by the UNESCO General Conference held in 2003. At that time, the international community recognised the need to raise awareness about cultural manifestations and expressions that until then had no legal or programmatic framework to protect them.


According to Pamela Gutman of Australia National University, the inscription found in Arakan dating between the 5th and 11th centuries enable us to reconstruct, in fairly broad sense, the history of the period. The most important are the royal edicts, the prasastis, which provide the framework for the political history.


The Anandacandra inscription is a priceless document, which not only has lists of the personalities of each monarch, but also some of the major events of every reign. It is not only an important epigraphic record but also it was part of a ceremonial tarana (portal) bristling with mystical connotations. The components forming this doorway were the pillar itself, a lintel, an octagonal column and a swinging gate.


The early history of this inscription pillar is a blank. It was first mentioned in the Rakhaing chronicles when it was conveyed from Vaishali on the orders of King Mong Ba Gree (reigned 1531-1553) to his Shitthaung pagoda at Mrauk U, nine miles to the south. Ten various dates are given for this event, such as 1534, 1535 and 1536. The north entrance of the pagoda then became the Inscription's new home. On the death of Mong Ba Gree in 1553, the pillar was neglected, and thereafter for over four centuries abandoned and finally used as a gatepost.


As noted rightly by Noel Singer, “if Johnston had not been translated the contents of the Inscription, it may be remained inaccessible for well over a thousand years, would never have been known. Although the Rakhaihg chroniclers, monks and laymen alike, were incapable of deciphering the Sanskrit text, they were not above providing fictitious names and accounts of the rulers of this and other ancient sites.” (Noel F. Singer, ‘Vaisali and the Indianization’pp.39-40)


The Shitthaung pillar was first notice by Dr E. Forchhammer. According to him, “about half a mile north of the palace, is the Shiithaung pagoda erected by King Minbin, the 12th of the Mrauk-U dynasty who reigned over Arakan from A. D. 1531 to 1553. The shrine is the work of Hindu architects and Hindu workmen; the skill and art displayed in its construction and ornamentation are far beyond to what the Arakanese themselves have ever attained to; the entire structure is alien in its main features to the native architectural style....to the left hand of the entrance (north side) of the shrine a square stone pillar rises to the height of 3.3m from the socket ; each side is 2 4"(.7m) broad ; three sides are covered with inscriptions in Nagari characters; that facing the east is almost entirely defaced and the text cannot be recovered ; the inscription on the north side is also much damaged; the lines are very irregular and the letters badly engraved ; that on the west side is best preserved; the south side of the pillar has not been inscribed; the stone exhibits no ornamental designs.”(Arakan..Forchhammer p.20)


Although Forchhammer first brought this inscription to the notice of scholars, it was not until 1929, when Duroiselle sent an apparently inferior set of rubbings to the Government Epigraphist in India, that preliminary account was published ASI 1929-26 pp.146-148 and ASB 1929-26, pp. 27-30 and 59-60. A number of misconception found in this reading have been perpetuated by some Indian scholars. Under the instigation of Professor Luce, a new set of rubbings, prepared by his able assistant U Sein was sent to Professor E. H. Johnston at Oxford. With the aid of an unpublished reading of the last fifty lines prepared by Dr N. P. Cakravarti, one-time Government Epigraphist for India, Johnston made an almost complete annotated transliteration of the inscription intended for Epigraphia Birmanica. The break in publication due to the war, and Johnston’s sudden death in 1942 led to his posthumous article “Some Sanskrit Inscription in BSOAS XI (1944) prepared by Prof. Luce “from old notes on the backs of envelopes” and with an excellent translation and further annotation of the transcription by Professor L. D. Barnett. A good rubbing was published in IB IV (pls. CCCXLVIII and CCCXLIX), together with bibliography. Although the importance of the inscription was now recognized, it was not until D.C Sircar in his article “Inscription of the Chandras of Arakan” in EI XXXII made new observation about the date and edited three new Chandra inscriptions that any significant progress in its elucidation was made.


The work of Johnston and Sircar was broght to the notice of Burmese scholars by U Myint Swe in his paper “ Annadacandra’s Sanskrit Inscription” in the Union of Burma Journal of literacy and Soial Science Vol. II,3 (Sept 1969) and again by the U Than Tha Aung, Director General of Higher Education, in his book “Annandacandra Inscription, publish by Rangoon University in 1976. (Gutman’s Ancient Arakan pp.35-36) 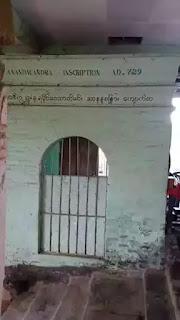 The Annandacandra Inscription is an invaluable heritage of Arakan, which Arakanese people regard to be very authentic and they are proud of it. It monument is the historical Heritage of all the peoples of Arakan.


Hence, we all raise our voice to make this monument to be Intangible cultural heritage (ICH) and the UNESCO must consider it in relation to the tangible World Heritage focusing on intangible aspects of culture.


However, it is worth mentioning that, the language that used in that inscription was different from Rakhine people but similar to Rohingya language.


Some of the usage of Inscription which are current or near to current in Rohingya language are: -