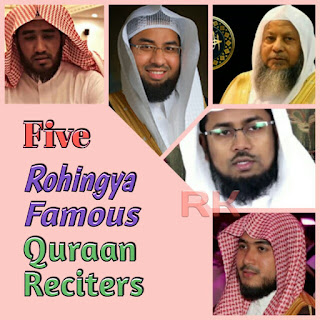 His father Muhammad Yusuf was a poor man whose family had migrated from their native land of Burma to Makkah to flee from the oppression that was carried out against the Muslims of Burma. He had a very harsh childhood with his elder brother working for the family, when his father was imprisoned in Burma.

He then enrolled in the Faculty of Sharia at the Islamic University of Madinah, receiving a bachelor's degree in 1396 AH (1976). Then he specialized in Tafsir and `Ulum al-Qur'an (Quranic exegesis and sciences of the Quran), receiving a master's degree from the Faculty of the Holy Qur'an and Islamic Studies. He received a doctorate from the same faculty in 1408 AH (1987/1988).


Sheikh Abdul Wali Al Arkani who is also called « Abu Muad » in relation to one of his sons; was born in 1983 in the region of Mislafah in Mecca. He is a well-known Quran reciter and is currently the Imam of Khadem Al Haramein Al-Sharefein mosque in Jeddah, Saudi Arabia.

Sheikh Al-Arkani learnt the Quran at the age of 14 first at the hand of his father, then other Sheikhs and teachers in different mosques. He then moved to Mecca and was also the student of a number of prominent Sheikh such as Sheikh Harun Dahir, the late Sheikh Muhammad Kabir, Sheikh Muhammad Idriss Abbass and others. He is also a friend of Sheikh Ahmed Bin Muhammad Al Shariff; the personal imam of the prince Nawaf Bin Abdul Aziz.

Moreover, he joined the Al Arqam Ibn Abu Al Arqam Institute in the Sacred Mosque (Masjid Al Haram) and graduated in 1997. He performed as an imam for the first time at the age of 13 at the mosque of Shaykh Muhammad Saleh Jamal in Meccah moving to other mosque within the same city before moving to Jeddah.

Given his popularity, Shaykh Al Arkani was invited to perform in different mosques within and outside Saudi Arabia for he was officially invited by the Governor of the Emirate of Ajman from the UAE to perform imamate next to the prominent reciter Mishary Rashid Alafasy.

At last, with his unique and eminent voice, there are audio and visual recordings of Shaykh Al Arkani’s recitations of the Quran available for his admirers. The recordings are also broadcasted in a number of Arab religious channels of Saudi Arabia, Abu Dhabi and Bahrain. 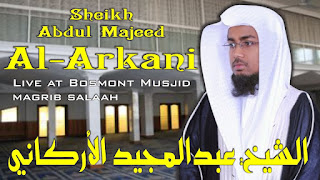 Abdul Majeed Arkani is a famous Quari in Saudi Arabia. His father is  Abdul Ahad. Imam Khodar Mosque Jeddah. Travelled many countries to recite Quran including South Africa. People are fond of his beautiful voice. His recited Suuras are available on YouTube.

Rashid Al Arakani is a Rohingya live in Saudi Arabia. He is a Imam of Aisha Solaiman Al Rajhi Mosque In Makkah.