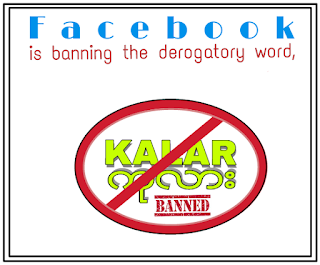 Facebook, the most popular social media in Burma, has taken the initiative to fight against hate speech recently. Several Faceook users reported that their posts containing the word, kalar, was deleted and post owners were given notifications by Facebook.
However, it seems Facebook is indiscriminately (and hilariously) banning all the posts that contain the word, kalar. Although the word is deemed to be abusive and offensive by many, it is senseless to censor every post without checking the context or linguistic similarities.
A week earlier when I discovered this new policy of Facebook, I made a post telling my Facebook friends the word is banned. Ironically, my post was removed by Facebook and I was banned from liking, posting, and sharing content on Facebook for 24 hours because the post “doesn’t follow the Facebook Community Standards”.
A post made by one of my friends was deleted today because there was the word, kalar, in it. However, he was wittily asking his friends if they know where he can cure his lower back pain by using a pun. The phrase, ku la — ‘cure’ (ku) + question word (la) in Burmese language — bears striking resemblance verbatim with the racist term but they have a world of difference in context.

It is getting more ridiculous as a Facebook post of someone who said, “I want to have vegetable and split pea soup (kalar bae hin)” got deleted. The soup is a popular vegetable dish consumed by the Burmese and named after chick pea (kalar bae).

There seems to be a two-factor trigger to have a post deleted: the presence of the word and report on that post. However, it is not clear whether Facebook uses AI software or a team of humans who understand and speak Burmese language to monitor the potentially hateful content.
Facebook is often criticized by the media such as Aljazeera and Myanmar Timesfor providing platform for hate speech against minority Muslims in Myanmar.
Despite the criticism and ridicule from the Burmese netizens on the recent change of Facebook policy, it is a sign that Facebook started to show commitment to remove hateful content and profiles during the past weeks. The Facebook account of an anti-Muslim monk, U Thu Seikkta, who is a secretary of the Patriotic Monks Union, was deleted from Facebook weeks ago on the ground of racism. Likewise, Facebook took an active role in blocking the ultra nationalists who incite violent hate speech against Muslims from Facebook.

While Facebook, as a communication channel of ideas, is responsible to take action against the content that expressed animosity against vulnerable populations, the decisions it made should be based on common sense and reason. To provide protection and prevent spreading of hate speech, Facebook must do more than mindless banning of a particular word. 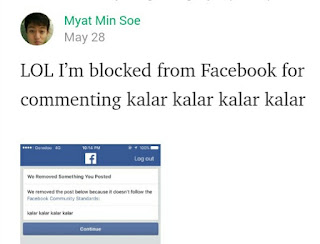