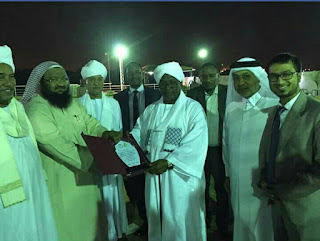 -------------------------------
Sudan announced to host Rohingya people with citizenship, who have been subjected to extremely inhumane conditions.
The vice president Hassabo Mohammed Abdel-Rahman when he received the a delegation from the charities including like the Qatari Eid Foundation charity, the African Agency, the Islamic Dawa Organization, Zubair Charity Foundation and the Organization of Qubool for Peace and Development, through the appreciation of the Sudan government and people for patience and steadfastness towards Rohingya people in the face of what they have suffered.
Abdul Rahman said that Sudan is keen on despite conditions that result in humanitarian role in the regional and international surrounding.
For his part, the transfer of Sheikh Ali Abdullah Al Suwaidi, Director Charity Gala Foundation and Sheikh Abdullah al Maruf positions taken praising Sudan.
Sheikh Maruf said that the reception for the citizenship of Sudan for the people of Rohingya is not surprising and Sudan has always been a supporter of charitable and humanitarian work.
Posted by Rohang king at 10:44 AM