AFP reporter's encounter with the body of Che Guevara 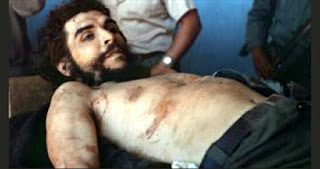 On October 10, 1967 the Bolivian army presented the body of iconic Marxist guerrilla Ernesto "Che" Guevara to journalists in a makeshift morgue in a small town.


AFP correspondent Marc Hutten was among the group flown to Vallegrande, around 700 kilometres (430 miles) southeast of the capital La Paz, to report on the final demise of the Cuban revolutionary hero.


The army insisted that the 39-year-old "Che" had died of injuries after a battle in the Bolivian bush where he had been clandestinely operating with the aim of igniting a new uprising. It came out later that he had been captured and executed.


Guevara was buried in Vallegrande for 30 years, before his remains were found and taken to a mausoleum in Santa Clara in Cuba.


Hutten's few photographs of Guevara's body provided proof for the world of the death of the Argentinian fighter; his accounts vividly described that extraordinary media event 50 years ago.


We were around 30 journalists, only three of us foreign correspondents, who travelled to Vallegrande, a town slumbering in the southeastern Bolivia heat, to record the death of one of the most distinguished of guerrillas.


Descended from the misty heights of the military airport at La Paz (4,100 metres/13,500 feet above sea level), our Dakota touched down at Vallegrande at siesta time.


At the other end of the town, its streets deserted, a gate at which stood about 50 curious onlookers opened onto a piece of ground at the other end of which was, on a hillside, a makeshift morgue in a former cowshed.


Spruced-up officers and armed soldiers meet us there.


The corpse of a bearded man with long hair, dressed only in olive-green pants, lies on a stretcher placed on a cement sink.


A smell of formaldehyde hangs above the bullet-riddled and pale body, at the foot of which are two others, thrown on the floor.


The officers tasked with dismissing any objections we might have about the identity of "Ramon" are at pains to point out the resemblance, feature by feature, of the body with that of the guerrilla. Doubt was no longer possible, they tell us: the fingerprints of the body match those of Guevara.


"Ramon" was fatally wounded in a battle last Sunday, a couple of kilometres from La Higuera, close to Vallegrande. He died of his wounds in the early hours of Monday. "He was not executed," says Colonel Arnaldo Saucedo, commander of the second battalion of rangers operating in this sector.


"I am Che Guevara, I failed," he is said to have muttered to the soldiers who had taken him prisoner. That is in any case the version of General Alfredo Ovando, commander in chief of the Bolivian armed forces. Questioned about this at a press conference a little earlier, colonel Saucedo however declared that "Ramon" had never regained consciousness.


The journalists milling around the morgue, photographers and cameramen among them, display a mixture of stupefaction and disbelief. But it seems impossible there could be any mistaken identity.


A Bolivian colleague says to me: "Vallegrande has just entered into the revolutionary history of South America."


Colonel Saucedo, who held a press conference after the presentation of the bodies, claims there are only nine guerrillas left in all of southern Bolivia and hardly any dens of rebellion. Athletic with a black bar of a moustache across his face, he speaks standing beneath a religious image hanging on the wall of the hotel room where we are gathered.


An American soldier is present at this meeting. He wears no military insignia but his build, ruddy complexion and uniform betray his nationality.


I go to question him in English. He turns to a Bolivian soldier to ask, in Spanish, what I want. To me, he says: "No comprendo," and walks out.


Colonel Saucedo tells me later: "Yes, he's an American soldier, an instructor at the Santa Cruz centre. He came here as an observer. No American 'green beret' is involved in military operations in Bolivia."


A list of 33 guerrillas, among them more than a dozen Cubans, killed since the start of hostilities on March 23 is made public at Villegrande.


General Ovando portrays the Bolivian guerrilla movement as unexpectedly few in number, claiming they were never more than about 60 men.


"The guerrilla adventure has ended," he says, as all crazy adventures must. Its failure was due to the lack of any popular support and the harshness of the terrain. He adds: "We will bury Guevara right here, at Vallegrande."


The guerrilla "Ramon" was said to have met his death in a small and narrow valley after a fierce battle that was fought body to body, or almost: the nine bullets that struck him were fired at a distance of 50 metres.


He left behind a journal in which the handwriting, which fills the pages of a German diary from November 7, 1966 to October 7, 1967 -- exactly 11 months -- left no room for doubt, it is said, about the identity of the author.
Posted by Rohang king at 12:34 AM