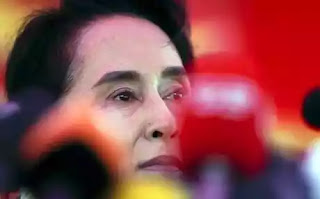 Muslim voters in Myanmar are seemingly pinning their hopes on Aung Sun Suu Kyi for a guarantee of their rights as citizens. And that despite the fact that the National League for Democracy leader has largely been silent on the issue of their persecution in the Buddhist-dominated country.

A number of such voters, interviewed by bdnews24.com, say they hope to get back their basic rights once the NLD is voted to power.

Suu Kyi’s party is the frontrunner in Sunday’s polls, Myanmar’s first since a semi-civilian government took over in 2011 after about 50 years of military rule.

The Nobel laureate has in the recent past been criticised for saying too little about the plight of her country’s Rohingya Muslims.

Wen Nayng, a Muslim cab driver in Yangon, was clear about his view of the situation. “We’re still being marginalised,” he said.

He said many of his relatives have been living in camps for Rohingyas in Bangladesh’s Cox’s Bazar.

“Our expectation is very little. We’ll vote for her party even though she never spoke for us or stood by us, hoping that we’ll get equal rights once the NLD forms the government and we won’t be discriminated against,” he said.

While campaigning in Rakhine state last month, Suu Kyi said it was "very important” that people, regardless of race and religion, lived safely in the country.

Muslim voters say they find the NLD chief’s statement reassuring, although the party did not field any Muslim candidates or speak against Muslim marginalisation.

Most Muslims in Myanmar live in Rakhine state. The Rohingya Muslims do not have voting rights. Naypyidaw dubs the Rohingyas ‘Bengalis’ and does not recognise them as an ethnic community.

Hundreds of thousands of Rohingyas have fled to Bangladesh to escape persecution over the years. Naypyidaw has repeatedly rejected Dhaka’s call to take them back.

Muslims make up about 10 percent of Myanmar’s population.

When asked about the party’s silence on sectarian violence, NLD leader Win Naing noted that there was “no environment to protest”.

USDP leader Tin Mang Un told bdnews24.com: “Rohingyas, staying in Bangladesh, are not Myanmar citizens. Our stance on them is clear.

“Those living in the Arakan are either Arakani or Rakhine. There are various ethnic communities here. So, there’s no option to take a different approach to it.”

He, however, declined to say anything about his party’s views on Rohingyas living in Myanmar.

A Reuters report last month quoted a Rohingya man as saying that life in the Rakhine state was “like being inside a prison”.

NLD leader Win Naing said his party “did not believe in minority or majority divisions”.

He said Suu Kyi had spoken of national unity during her tour of Rakhine last month.

“She did not speak for or against a particular community. This sends a message that the NLD does not differentiate between the ethnic communities.

“We want to include everyone in the democratic process,” he added.