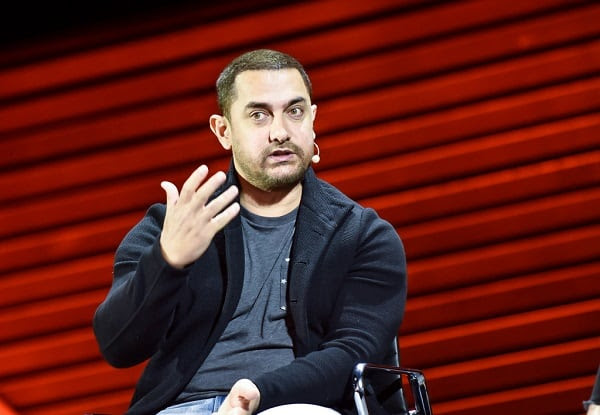 He claims his wife even wants them to move out of the country!

Shah Rukh Khan recently courted controversy when he spoke about the award vapsi and the growing intolerance in the country. The actor was labelled a Pakistani by a few over enthu BJP and RSS leaders, raising to much hue and outcry by the actor’s fans, admirers and supporters.
Though Shah Rukh Khan didn’t respond to the controversy, there is another superstar who spoke on the same touchy topic recently. That happened to be Mr Perfectionist himself, Aamir Khan!
During the Ramnath Goenka journalism awards ceremony, Aamir Khan spoke for the first time about his concerns and fears over the growing insecurity in the country. He said, “I feels a sense of insecurity and fear. In the last 6-8 months, there has been a growing sense of despondency. When I go home and talk to Kiran (his wife), for the first time, she says ‘Should we move out of India?’!”
He admits that his wife fears for her child and the tension-filled atmosphere in which it is growing.
He also stated, “For any society, it is important to have a sense of security. It is important for the people who are elected representatives to take a strong stance and make strong statements, when there is a sense of insecurity!”
Quite bold statements, which will definitely prove controversial for the actor, going by the previous history over the last few months.
So we ask you readers, is the Dangal actor right in his stand, or has he spoken a bit too much? Share your views below…

Email ThisBlogThis!Share to TwitterShare to FacebookShare to Pinterest
Labels: Entertainment