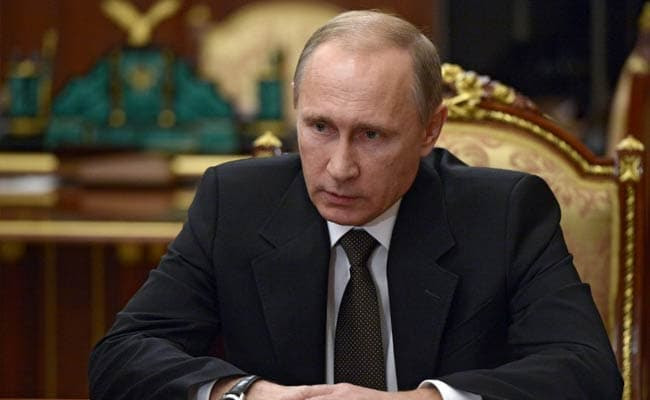 Russia's President Vladimir Putin.
Moscow: Russian President Vladimir Putin has vowed to find and punish the attackers who brought down a plane with 224 people on board in Egypt's Sinai last month, after he was informed by the country's security chief that it was a "terror act."
Russia has also said it will pay $50 million for information about "terrorists" responsible for the crash of the Airbus A321M on October 31.

"We will search for them anywhere they might hide. We will find them in any part of the world and punish them," Mr Putin told Alexander Bortnikov, Russia's security chief, late on Monday. The Kremlin released the remarks on Tuesday.
The Russian President called the attack onMetrojet Flight 9268 which exploded shortly after the Airbus A321 took off from the resort city of Sharm al-Sheikh, "one of the bloodiest crimes".

"One can say unambiguously that it was a terror act," Mr Bortnikov, the head of Federal Security Service (FSB) told Mr Putin. He cited experts to say that the plane disintegrated midair due to a bomb with the equivalent of a kilo of TNT.
In response to the attack, President Putinpledged to step up air strikes in Syria where Moscow is conducting a bombing campaign it says is targeting the Islamic State group and other "terrorist" groups.
"The combat work of our aviation in Syria must not only be continued. It must be intensified so that the criminals understand that vengeance is inevitable," Mr Putin said.
The Airbus A321M had crashed shortly after taking off from the resort of Sharm el-Sheikh on its way to the Russian city of St Petersburg, killing all 224 people on board.
The terror group ISIS, which controls swathes of Iraq and Syria and is battling the Egyptian army in the Sinai Peninsula, had earlier claimed responsibility for downing the plane. Russia had said it was waiting for the official results of an investigation into the tragedy.
Story first published: Nov 17, 2015 14:05 IST
Posted by Rohang king at 9:17 AM