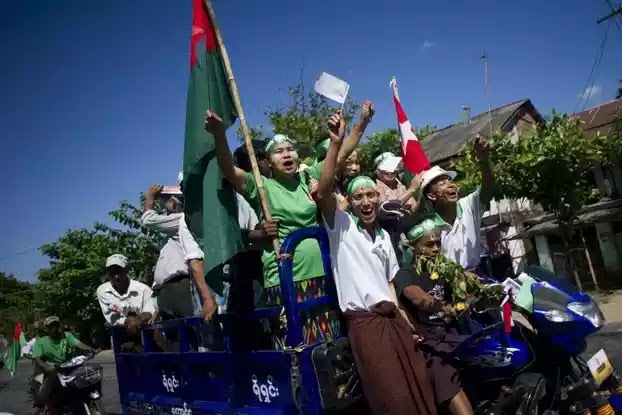 Speaking to RFA’s Myanmar Service on the final day of campaigning before the Nov. 8 poll, ruling party co-chair Htay Oo vowed that the USDP would win as much as 80 percent of the vote.

“Some expect that the USDP will win 80 percent [of the vote] in the election, but I want to say we will win between 65 and 80 percent,” he said.

Htay Oo said that experts have underestimated the support for the USDP in Myanmar and suggested that the country’s 2012 by-elections, in which the NLD won 43 out of the 44 parliamentary seats it contested, were a fluke. A total of 46 seats were up for grabs at the time.

“The USDP didn’t show the strength of the party in the past, but when we campaign, we can see how many party members and supporters we have,” he said.

Htay Oo’s bold prediction came on the same day that USDP central executive committee member Nada Kyaw Zwa told supporters during a campaign rally in Yangon’s Thingangyun township that the vote would herald the “success of the green,” referring to the party’s banner color, according to a report by the Irrawaddy online journal.

“I’m sure that we will win on Nov. 8. So we will no longer use the phrase ‘we will win.’ Let me tell you in advance that that we have won,” he said.

The Irrawaddy said that while thousands turned out for USDP campaign rallies across the region on Friday, it was unclear how much support the ruling party actually has, as many people indicated that attendance was compulsory or that they had received remuneration for showing up.

The USDP is campaigning on a platform of demonstrated reform, saying that Myanmar has made significant strides towards democracy since President Thein Sein’s quasi-civilian government took power from the former military regime in 2011.

The transfer of power took place following 2010 general elections that the NLD boycotted, claiming the polls were neither free nor fair. The NLD had swept the previous election in 1990, but the then-ruling junta ignored the results and placed Aung San Suu Kyi under house arrest for more than a decade.

While Myanmar does not conduct public surveys ahead of elections, observers generally expect the NLD to dominate the polls this weekend, and even some high profile USDP officials have acknowledged that their party is facing a tough fight.

Under the constitution, drafted by the former military regime in 2008, 25 percent of seats in parliament are reserved for military appointees, and the USDP would need to win a bloc of at least 26 percent of seats to influence the selection of Myanmar’s next president.

But last week, former USDP chairman Shwe Mann told supporters at a rally in Bago region’s Phyu county, where he is running for a seat in parliament, that “it will be very difficult to win” even that percentage of the legislature due to the NLD’s popularity.

Shwe Mann, who remains a ruling party member and speaker of parliament, was ousted as chairman of the USDP in an Aug. 12 reshuffle. Experts have suggested the move was prompted in part because of his close relationship with Aung San Suu Kyi, who has aggressively pushed for reforms in Myanmar, including to clauses in the country’s constitution she has slammed as undemocratic.

The USDP’s forecast of a win came as the Association of Southeast Asian Nations (ASEAN) Parliamentarians for Human Rights (APHR) said the legitimacy of Myanmar’s elections had been severely undermined due to government decisions in the lead-up to the polls.

“Regardless of what happens on election day, fundamental flaws, which have gone unaddressed, mean that this vote cannot be considered free, fair, inclusive, or credible,” APHR chairperson and Malaysian lawmaker Charles Santiago said in a statement Friday.

The APHR pointed to widespread disenfranchisement, the deliberate exclusion of specific ethnic and religious minorities, and a failure to amend the 2008 constitution as factors preventing the election from accurately reflecting the will of the people of Myanmar.

“International observers will likely harp on technical aspects of Sunday’s vote. But even if everything goes perfectly on that front—a highly unlikely outcome—decisions by the government have already rendered this contest far short of real democracy,” Santiago added.

The APHR highlighted the decision to disqualify dozens of Muslim candidates earlier this year as a “fundamental abrogation of the commitment to free and inclusive competition,” saying the vast majority of them were barred “on dubious claims” that their parents were not citizens.

Additionally, the decision to revoke voting rights from temporary ID card holders, who had been allowed to participate in previous elections, deprived hundreds of thousands of the opportunity to take part in the political process, including up to one million ethnic Rohingya Muslims, the group said.

The APHR also noted barriers to voting for domestic and overseas migrant workers, as well as the cancelation of voting in nearly 600 village tracts in conflict zones, which it said denied voters in dozens of townships nationwide the opportunity to elect their representatives.

It slammed the constitution’s provision which reserves 25 percent of seats for military appointees, saying that “even an overwhelmingly popular political party will struggle to achieve a majority” in parliament necessary to form a government.

When military-appointed lawmakers blocked amendments to the charter that would have removed their veto power over future constitutional changes in June, APHR said the move “represented a decision to continue the blockade on Myanmar’s democratic advancement, which Sunday’s vote will be incapable of overcoming.”

While the APHR dismissed Myanmar’s elections as lacking any shred of legitimacy, the diplomatic missions of several countries and the United Nations called the polls an “important milestone” in the nation’s transition to democracy and urged all parties and other actors to ensure they are conducted fairly.

“As international partners and close followers of the electoral process, we call on all stakeholders to ensure that these elections are conducted peacefully, transparently, and in accordance with the will of the people; that the period during and after election day is marked by calm, equitable treatment of all; and that there be dialogue among contending parties and candidates,” they said in a joint statement.

“These elections will be an important milestone in Myanmar’s transition to democracy, and the responsibility for their success rests with the government, political parties, civil society, the media, and most importantly, the people of this country, charting a peaceful, just, and united way forward together.”

The statement called on the people of Myanmar to “make their voices heard” by going to the polls and casting their votes freely, and affirmed the international community’s support for the country’s citizens.